A place to read

Recently I have found it difficult to read. I start a book, get about 20 pages in and put it back down again. I have a pile of books by my bed which is steadily growing with each new purchase from Waterstones. I look at them everyday and simply can't choose. I think it may be the same problem as having a massive pile of chocolate and all you want is a pack of Harribo...or is that just me? Or perhaps more likely I have fallen into the old traps and forgotten The Rights of the Reader. I feel the pressure of thousands of unread pages judging me.


Anyway I feel quite the hypocrite writing a blog about reading without a single book to my name, so tonight before I go to bed I shall pick a book at random from the pile and read for the pure pleasure of it. Come next week you will have a review. The weather is perfect and I barely have any work on so it will be ideal to while the hours away reading, that is, if I remember how.
Posted by Rebekah at 09:34 No comments:

Email ThisBlogThis!Share to TwitterShare to FacebookShare to Pinterest
Labels: books, reading, The Rights of the Reader, Waterstones

Today is a wonderful day. Summer has finally reached us and I plan on making the most of it - after I write this post of course.

My gorgeous calendar by Kate Beaton (http://harkavagrant.com/ if you've not read her you should) tells me that it was around this time in 1862 that Lewis Carroll aka The Reverend Charles Dodgson went on a boat trip with the three Liddell girls and the story of Alice's Adventures in Wonderland was first brought to life.  On a day like this I am more than willing to believe that the wondrous tale began at the behest of a bored, ten year old, Alice Liddell on a boat in the middle of the English countryside.

For my dissertation I studied adaptation and used Alice in Wonderland as my main example. There are many glorious, and some not so glorious films based on the novel. One looks at the story through the eyes of an elderly Alice Liddell, or as she is now known, Mrs. Hargreaves. In the film Dreamchild 1985 Mrs Hargreaves is quite literally Haunted by the Images in Alice's Adventures in Wonderland. In it's essence the film is a personal story through which Alice Hargreaves struggles to comprehend what being Alice actually means,both to her and her childhood friend Charles Dodgson.


I like the image of the young Liddell girls floating along a river listening to wondrous tales and the impetuous Alice demanding the story be written because the character bares her namesake. it's a fine beginning and I can quite imagine my ten year old sister doing the same. It is a lovely tale on top of a tale and the ending to Dreamchild is deeply moving.

However when reading Alice I don't think of the reverend Dodgson or even Alice Liddell, I am completely absorbed by the story as I see her sitting lazily by the river bank, on the very first line, feeling hot and stupid in the summer heat.

Academically I have read into each sequence of the novel and attempted to uncover hidden meaning. There are countless books based on Lewis Carroll's works, they are fascinating and I love discovering more about the man, both reverend and Author but at the same time I can still follow Alice down the rabbit hole and be lost in the world beneath.


Here's a link to the the Dreamchild trailer it truly is an amazing film:
http://www.youtube.com/watch?v=o8JvMdfNOrg

Where I apologies for my long absence


Yes well, it really has been quite some time. Just a quick Blog to say I've not vanished and there will be regular updates from now on!

Since I've last written this Blog I've become a Mrs and gained a new last name. I am now a Graves. Wedding plans have taken up most of the last year and my favourite touch to the day was my husbands idea. We decided to use our love of books on the big day and put our favourite books on each table for the guests to sign instead of a guest book.  The kids table was one of my favourites.... 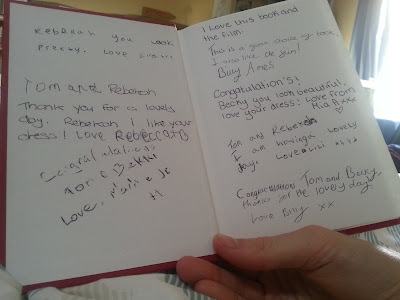 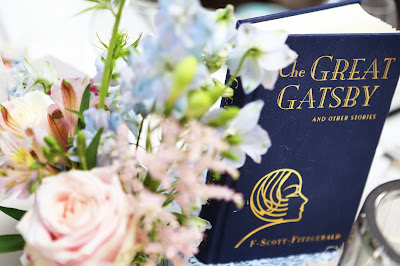 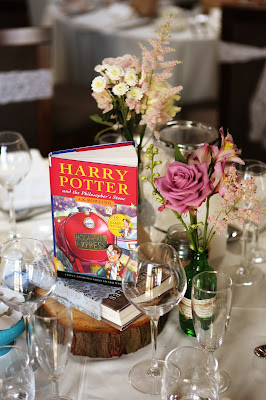 I've had the most fun finding the messages as I re-read the novels. Now all I need is a house to put them in...

It all began with a discovery of witches...

....That’s what Deborah Harkness wrote in my copy of her book. She is a lovely lady and I was more than a little star stuck by her and her beautiful publicity team.  So much so that I never asked her for any advise on writing. It was a very busy day at work when she came into Waterstones with nowhere near enough staff. I sheepishly held out the Waterstones author signing book and chatting about the weather.

It’s been a very long time since I posted anything on here and that can mainly be blamed on starting work.  It is wonderful being surrounded by books and being able to talk about books all day. The people are interesting and most of them are nice too.
Even though I’ve only been working there a month I can’t remember what it’s like not to care about new releases and ‘Super Thursdays’.

I’ve finally started reading Northern Lights after stubbornly refusing to for around five years (I think it had something to do with the film). It is an amazing book full of magic but not in a fantastical way. I have no trouble believing that armoured bears and daemons exist.  There is a darkness to the novel which I’ve rarely seen.  Because the fantasy is portrayed in such a realistic way the dangers feel all the more real. It is not a dark creature pursuing the Lyra (the protagonist) but a person of flesh and blood. I can’t wait to carry on reading.

The unfortunate incident of the bicycle and the swamp


Well I've been out of commission for a little while due to the aforementioned incident of the bike and the swamp. A message to all girls out there: do not ride bikes made for boys. A night in hospital and copious amounts of pain killers has taught me why ladies bikes have that little slope.

I am well on the mend now and being near comatose state for the past week has given me lots of time to catch up on reading.

Recovering from general anaesthetic and reading this book: 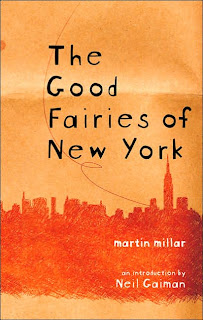 Is interesting to say the least, It’s a fantastic book about two rebellious Fairies who have been chased out of Scotland and find themselves in New York city. I love it. it seems a little like Terry Pratchett’s Wee Free Men but with a lot more swearing and phone sex lines. I laughed out loud regularly, and I’m fairly certain it wasn’t the laughing gas. It’s a beautifully crass mixture of British folk lore and modern life; not so much melding as colliding.

On another note, I believe hospital wards would be vastly improved by a few books. My fiancé had the sense to bring a book for me but to be honest it’s not really at the top of most people’s minds when their heading to the emergency wards. I know that many library books are withdrawn every week, I wonder if they could be sent to the local hospitals? Then again I’m probably being naive in wanting to waste precious hospital space with books...

Of Course Voldemort was defeated by Mary Poppins Just a quick blog to say utterly amazing I thought the children’s story section was in the Olympics opening ceremony. The way the dark things crept into the children’s dreams and then were defeated by a comforting hand was just wonderful. The giant Voldemort was an impressive spectacle in itself and the child catcher was just as terrifying as I remember him being. Danny Boyle did a magnificent job in capturing the imagination and fear invoked by fine children’s tales, and probably brought back those feelings in the adults watching as well. To tell or not to tell


I have a dilemma. My little sister and I love reading Harry Potter together. However around a year ago (when she was eight) we got onto book five, Harry Potter and the Order of The Phoenix. For those of you who’ve read it you know something devastating happens in this book. I told my little sister that it was her choice if she read on to the end but it might be too upsetting. She is still content to not know the sad ending and has given me the almighty decision of letting her know when she should read to the end.

I don’t want to be overly protective or try to control what she reads. However if I do tell her she’s ready when she’s not then I don’t think she’ll forgive me easily.

Thinking about this brought to mind the issue of when is the right time for children to read certain books. I am a strong believer that age restrictions on video games and films should be adhered to. In fact when I worked in the Library I could have been fined a phenomenal amount of money if I allowed a 14 year old to borrow a 15 rated film, even if their parents were present.

There is no similar law for books.  When looking at the latest library reading scheme website story lab I saw the Book Sorter which recommended books depending on gender, age, and taste. when looking for a nine year old girl I was shocked to see that Hunger Games  was suggested. The Hunger Games trilogy is fantastic, but I have to say I was more than a little traumatised and I’m 23! It was rated as a 12A when released at the cinema and although I’d be fined giving this as a film to a nine year old it is not the case with the book (which is a lot more gruesome and graphic than the film.)

I don’t have an answer to this question, but my gut tells me that if a child wants to read the book then they are probably ready for said book. I imagine when her curiosity gets too much she’ll read the end by torch light beneath bed covers. Rebekah
Hello there, I've worked in both a Library and a Childrens independent bookshop. I foolishly left my jobs to travel the world with my husband. I now work part time at Waterstones, which is great because i get to be around books all day but also not so great because depending on the week i can be working 8 hours or 30. I fill my time with writing, short stories, novels,poems, whatever takes my fancy. I believe reading is good no matter what form it takes and love to discover new interesting authors. Oh and I'm dyslexic and dyspraxic and probably other xics too that I'm yet to find out about, so please excuse my appalling grammar and spelling.